As noted by Ndulu and O’Connell [1], there are 5 characteristic features of Sub-Saharan Africa’s economic performance since independence:

Ten years later, these stylized facts still remain relevant. What are their causes? Of course, there can be no one overarching explanation, but the proximate causes are a challenging economic environment, problematic political institutions, and policy choices. It is hard to distinguish politics from economics, particularly in low-income countries, but this division can serve as a good heuristic device for a model of change.

Within the economic environment, we include broader ‘structural’ features that are common in many Sub-Saharan African countries (though by no means ubiquitous), such as fast rates of population growth, low levels of education, poor health, distance from large markets, landlockedness, distance from ports and navigable rivers, large overland transport distances and poor infrastructure. Linked to these problems are the small size of markets and the low concentration of economic activity. In addition, many countries have substantial resource endowments, which skew the economy towards sectors that have a very limited, or even negative, developmental impact.

The trajectory of Cote d’Ivoire, seen in its heydays in the 1960’s and 1970’s as an African ‘success story’, nicely illustrates common forms of interaction between the political and economic realms in post-colonial Africa. Under the rule of Felix Houphouët-Boigny (1960-1993), the country adopted a pro-market economic model based on agricultural exports and a significant presence of foreign capital. Some of the ‘pathologies’ of other African countries, such as  excessive interventionism in rural markets, the distribution of resources from rural to urban sectors, and a bloated (and inefficient) public sector were limited[1]. This has been frequently attributed to the landowning roots of much of the political elite, as well as the continuation of close links to France. Similarly to most other African countries, national unity was maintained through a complex system of rent allocation skillfully controlled by the president at the centre. 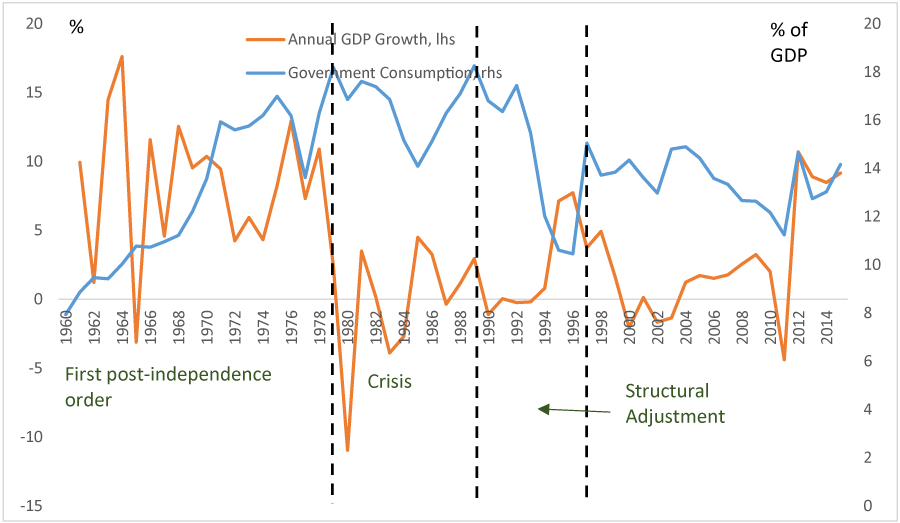 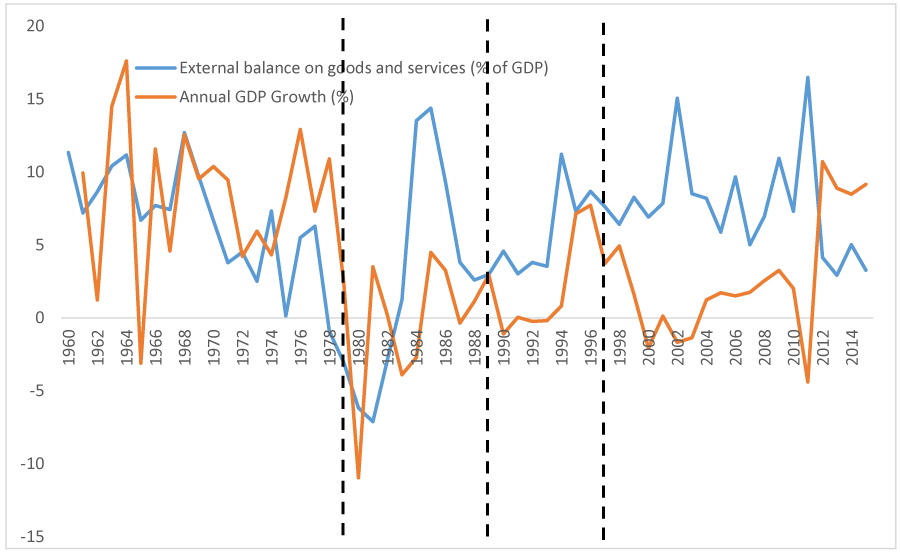 Throughout this period, there was growth in the manufacturing sector, although it was mostly geared towards processing commodities or serving the domestic market, and never achieved international levels of competitiveness. Despite the adoption of a ‘liberal’ economic model, much of the growth was driven by foreign investors, and most Ivoirians preferred entry into the public sector rather than working in the private sector, resulting in the absence of an independent, indigenous entrepreneurial class.

The period of high prices for cocoa and coffee in the 1970’s, combined with the political requirements of regime survival, led to an intensification of the rent-distribution process at the heart of the political order, resulting in a ballooning external debt. Once commodity prices started falling, and in the absence of other sources of foreign exchange, the economy tailspinned. In this new scenario, the system of national integration could not be kept in place anymore, paving the way for the collapse of the first post-independence Ivoirian order and a series of coups d’état, as well as  the First (2002-2007) and Second (2010-2011) Ivoirian Civil Wars.

The initial success and subsequent failure of the Ivoirian political economy shows that even in a somewhat improved form, some of the common features of African political economies, in combination, have not proved compatible with sustained economic development. This underscores African countries’ need for new development models that reconfigure the relationship between politics and economics.[2]

[2] For an elaboration of this point, see Lippolis and Peel (2018) – “Political Strategies for Industrial Development” Background Paper for Programme on Rethinking African Paths to Industrial Development. Blavatnik School of Government and Centre for the Study of African Economies, University of Oxford

The private sector in African countries also tends to be dominated by a handful of large firms, often controlled by ethnic or racial minorities who, together with foreign investors, possess the bulk of business and management capabilities in the economy[2]. Linked to this is a political pattern whereby political elites are connected to such firms, and marginalize indigenous businessmen so as to avoid competing foci of power, unless they happen to be cronies who help sustain the regime[3].

Overall, African states continue to exercise a substantial degree of authority over the economy[4] , but this authority is often used detrimentally, as a result of the incentives built in the political system. Politicians in (too) many African countries – both formally democratic and authoritarian regimes – buy political support by distributing rents through informal channels. Although this is a common feature of developing country politics, African countries seem to be marked by a higher degree of polarization due to ethnic, regional and/or religious differences, which aggravates this process[5].Combined with most states’ low capacity,this results in a pattern of politics consisting mainly of the distribution of whatever resources – internal or external – the state can control, rather than a fundamental commitment to growing the size of economy. The abundance of natural resources in many African countries only exacerbates this pattern, further reducing states’ incentives to support economic growth and investment, as they can more easily appropriate the rents in the resource sector. 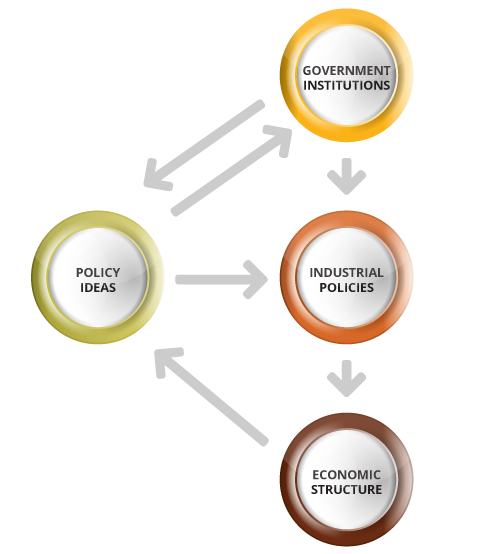 Finally, policy choices and prevailing ideologies have had an impact of the trajectory of African economies beyond the narrow incentives in the embedded in the political system. Benno Ndulu[6] details how a series of foreign ideologies such as Fabian socialism, developmentalism and neoliberalism have had a substantial impact on the policy choices of post-independence African leaders.

It is by acting in the realm of ideas that our project seeks policy change. Our underlying belief is that developmentally-oriented African leaders need new sources of inspiration when devising development strategies. Our contribution is modest here but still aims to help by introducing a ‘shock’ to the ideas space, as we aim to influence their policy choices, creating a positive feedback mechanism between politics and economics and helping to set a developmental process in motion.

[3] Scott D. Taylor (2012) – Globalization and the Cultures of Business in Africa: From Patrimonialism to Profit, Bloomington: Indiana University Press